In recent years, San Francisco has led the charge for additional workplace mandates. These include a higher minimum wage, paid sick leave, and the availability of a “fair” schedule. The city was the first to enact legislation on this latter point, passing the Formula Retail Employee Rights Ordinance in late 2014. San Francisco’s law requires most “chain” stores, as well as their contractors, to provide schedules to employees two weeks in advance, establishes a series of financial penalties for schedule changes that occur less than a week before the scheduled work day, and requires additional work to be offered to part-time staffers before additional employees are hired. To better understand the initial impact of this ordinance, this study provides two key pieces of data: A profile of the affected part-time workforce in San Francisco, California, and direct feedback from 52 “formula retail” establishments that have been affected by the law. Dr. Aaron Yelowitz of the University of Kentucky used data from the Census Bureau’s American Community Survey, the Current Population Survey and the Survey of Income and Program Participation to examine the parttime workforce in the specific industries impacted by San Francisco’s law. He finds the following:

• Just one in seven (13.9 percent) of part-time workers in San Francisco are estimated to be working that schedule involuntarily;

These data cast doubt on a basic premise of the legislation – that part-time workers in San Francisco are plagued by "insufficient" hours. Rather, most are voluntarily working part-time Also important for policymakers to understand is how San Francisco businesses have reacted to the scheduling mandate. Dr. Lloyd Cordor and his research team at CorCom designed a survey of 52 formula retail businesses operating within San Francisco that were affected by this law. To respond to these new requirements formula retailers are now less flexible with employees schedule changes (35 percent), offering fewer part-time positions (21 percent), scheduling fewer employees per shift (19 percent) and offering fewer jobs across the board (17 percent). The law’s proponents may be satisfied with the unintended consequences of the formula retail law – fewer part-time position, and less flexibility for those that remain – but they appear to be at odds with the preferences of the employees. 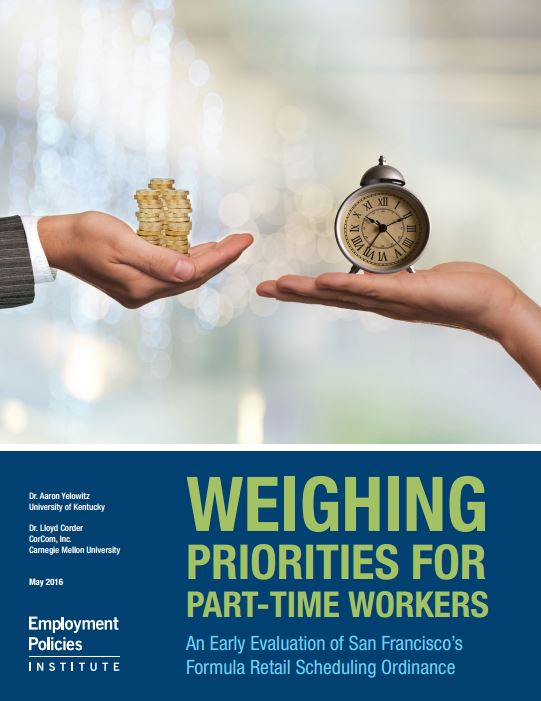