Minimum Wages and the Business Cycle

Does a Wage Hike Hurt More in a Weak Economy?

In his 2013 State of the Union address, President Obama called for an increase in the federal minimum wage to $9 an hour. The following month, Senator Tom Harkin (D-IA) and Representative George Miller (D-CA) introduced a bill to raise the wage even higher to $10.10 an hour. One year later, President Obama as well as Congressmen Harkin and Miller have agreed on the $10.10 figure. Less clear, however, is whether the empirical evidence shows that a higher minimum wage is good public policy. Some policymakers have expressed concern about forcing higher labor costs on low-margin businesses in a still-recovering economy. Economists have questioned the impact on the entry-level labor market: A summary of the last two decades of research on the subject, authored by economists at University of California-Irvine and the Federal Reserve Board, finds that raising the minimum wage reduces employment for the least-skilled and least-experienced employees. In this new study, Dr. Joseph Sabia of San Diego State University analyzes Census Bureau data to measure the impact of a higher minimum wage in periods of strong and weak economic growth. His results suggest that raising the minimum wage is rarely a good idea, and that it’s particularly risky in times of weak economic growth. Sabia’s research draws on data from 1990 through 2010, which covers the last three increases in the federal minimum wage and numerous increases in state minimum wages. Sabia makes use of this state-level variation to determine the impact of a higher minimum wage on the employment of less-skilled workers, carefully controlling for other factors that could affect their employment. Sabia finds that, over the past two decades, each ten percent increase in the minimum wage has reduced employed for less-educated young adults by as much as 2.3 percent. However, this top-line result masks important variation in the effects of the minimum wage that depends on the economy. For instance, in tight labor markets – when prime-age (age 25-54) male unemployment is below five percent – the minimum wage reduces employment for young drop-outs by roughly two percent.  However, in weak labor markets — when the prime-age male unemployment jumps above eight percent – the impact of a higher minimum wage more than doubles. Specifically, each 10 percent minimum wage increase reduces employment for young drop-outs by over four percent. Particularly at a time when unemployment for young adults has been above 20 percent for more than five years, Sabia’s results further support the idea that raising the minimum wage would hurt those employees it’s intended to help. And his finding that the effects of a higher minimum wage are exacerbated in a weak economy suggests that the drawbacks of setting the minimum wage to rise automatically—regardless of the state of the economy– should be considered carefully by policymakers on the local, state, and federal level. 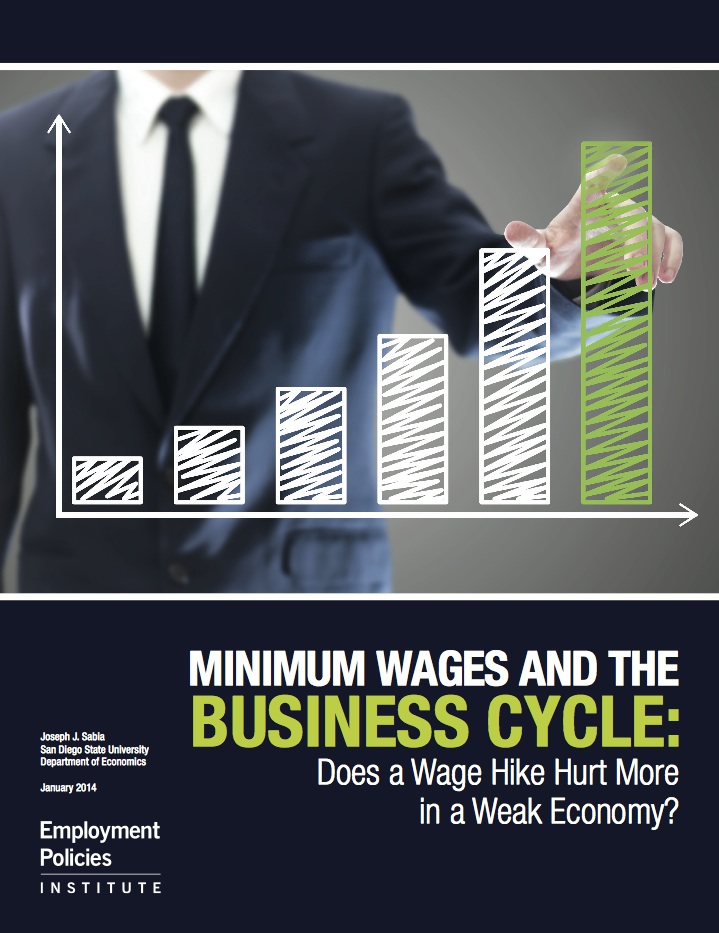