Racial Disparities in the Employment Consequences of Minimum Wage Increases

When the Great Recession’s negative effect on the U.S. labor market was strongest, the national unemployment rate stood at 10.1 percent—a depth last seen in June 1983. But the greatest amount of pain was felt by younger and more vulnerable workers—though not in equal amounts. For instance, the unemployment rate for 16-to-19 year-olds reached 27.1 per-cent at the recession’s trough. For white teens, the figure was 25 percent; for black teens, it was close to 50 percent. These staggering racial disparities in employment among young adults are nothing new. They’ve existed as far back as the early 1950s, when the federal government first started tracking these figures. A wide body of academic literature explores the reasons for this gap, but few studies have explicitly studied the effect of labor market wage mandates on minority groups, in part because of the lack of sufficiently comprehensive data. In this new study, labor economists William Even (Miami University) and David Macpherson (Trinity University) overcome this problem by amassing a data set from the years 1994 to 2010 that includes over 600,000 data observations—including a robust sample of minority young adults unprecedented in previous studies on the minimum wage. By taking advantage of the “natural experiment” created by the substantial interstate variation in the minimum wage between 1994 and 2010, and carefully controlling for labor market and demographic differences, the authors provide conclusive answers to the crucial policy question of whether wage mandates have a disparate impact on minority groups. Drs. Even and Macpherson focus on 16-to-24 year-old males without a high school diploma, a group that previous studies suggest are particularly susceptible to wage mandates. Among white males in this group, the authors find that each 10 percent increase in a federal or state minimum wage decreased employment by 2.5 percent; for Hispanic males, the figure is 1.2 percent. But among black males in this group, each 10 percent increase in the minimum wage decreased employment by 6.5 percent. The effect is similar for hours worked: each 10 percent increase reduced hours worked by 3 percent among white males, 1.7 percent for Hispanic males, and by 6.6 percent for black males. The authors put this disparity into context by estimating the job loss that occurred among these groups as a result of the Great Recession, and comparing it to the job loss that occurred during the same time due to increases in the minimum wage. Across all 50 states and the District of Columbia, approximately 34,300 black young adults lost their job due to the recession; during the same time period, 26,400 lost their job due to minimum wage increases that occurred. But the picture grows even more troubling when the authors focus just on the 21 states fully affected by the federal minimum wage increases in 2007, 2008, and 2009. Approximately 13,200 black young adults in these states lost their job as a direct result of the recession; 18,500 lost their job as a result of the federal wage mandate—nearly 40 percent more than the recession. In other words, the consequences of the minimum wage for this subgroup were more harmful than the consequences of the recession. The substantial disemployment effects that emerge from the data raise an important question: Why do black males suffer more harm from wage mandates than their white or Hispanic counterparts? The authors find that they’re more likely to be employed in eating and drinking places–nearly one out of three black young adults without a high school diploma works in the industry. Businesses in this industry generally have narrow profit margins and are more likely to be adversely impacted by a wage mandate. There’s also substantial variation in regional location, as black young adults are overwhelmingly located in the South and in urban areas. It’s also likely that unobserved differences in skill level and job experience play a role. To the extent that these differences are concentrated among young men of a particular race or ethnicity, this group would have the greatest risk of losing jobs when the minimum wage is increased. Minimum wage increases remain politically popular, which means they’ll continue to be debated at the state and federal level for years to come. But the debate on the employment consequences of the minimum wage has been settled conclusively, and this research proves that those consequences are felt most by young black males. 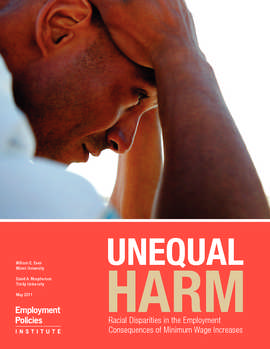