The Impact of an $8.25 New Jersey Minimum Wage on State and Local Government

This fall, New Jersey voters will decide whether to alter the state Constitution to raise the minimum wage to $8.25 and then put it on autopilot to rise in future years. The debate in the state has focused on whether or not raising the minimum wage would reduce opportunities for the entry-level workforce. But there’s another cost to consider—the financial cost to state, county, and municipal governments. In this study, Drs. William Even (Miami University) and David Macpherson (Trinity University) use Census Bureau data to calculate how much the minimum wage increase will cost state and local governments who em-ploy people at the minimum wage. The data show that roughly 13,000 state and local employees would be directly affected by a minimum wage increase to $8.25 (78 percent work for local government, and 22 percent work for state government.) Proponents argue that a $1 wage increase would indirectly affect employees earning up to $9.25, which increases the number of affected state and local government employees to roughly 25,000. Drs. Even and Macpherson estimate that the additional direct wage cost of a $1 minimum wage increase totals $11.2 million yearly. Because an increase in wages also requires additional contributions for payroll taxes, the total cost to New Jersey taxpayers is $12.3 million per year. Adding in employees who are indirectly affected, the annual wage cost increases to $19.7 million and the total compensation cost increases to $21.6 million. Either estimate would increase in most years thereafter due to the inflation indexing provision included in the ballot question. These cost estimates assume that government payrolls ar-en’t reduced as a direct consequence of the higher labor costs. Should this occur, the cost to taxpayers would be reduced only at the expense of job opportunities for the New Jerseyans who filled these jobs. The tax burden in New Jersey is already considered one of the highest in the nation, and local property taxes in particular are famously burdensome. In addition to the potential consequences for less-experienced jobseekers, New Jerseyans should also weigh carefully the fiscal consequences of altering the state constitution to raise the minimum wage. 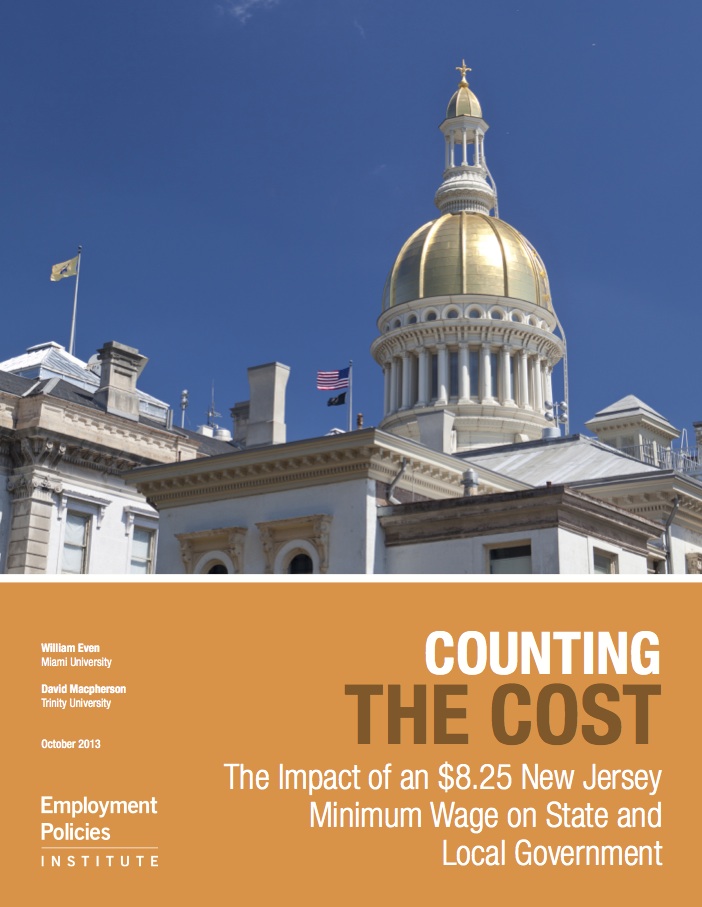