Employment, Earnings, and Poverty in the Full-Service Restaurant Sector

The Fair Labor Standards Act outlines the current tipping system in the United States, whereby customer-facing employees earning tips for their service are paid a required minimum base wage ($2.13 per hour at the federal level) in addition to the tips they earn. The gap between this base tipped wage and the regular federal minimum wage for non-tipped employees is called a “tip credit,” which employers can take to pay their tipped employees as long as their tip income added to the base wage amounts to at least the hourly regular minimum. Employers and tipped employees who oppose changes to the current tip credit system argue earning a base wage plus tips allows employees to earn far more than the standard minimum hourly wage. Those in favor of eliminating the tip credit argue it creates a more stable, flat hourly wage. Tipped restaurant employees in areas including Maine, New York, Virginia, New Mexico, and the District of Columbia have fought successfully to save the tip credit and their tips, pushing back against activists’ attempts to change the current system. In their latest study on the characteristics of tipped restaurant employees, Drs. David Neumark and Maysen Yen find that eliminating tip credits leads to harmful impacts for employees: Neumark and Yen also find that tipped employees are 20 percent (3.8 percentage points) less likely to be poor than other non-tipped minimum wage earners. By analyzing the effectiveness of eliminating the tip credit as an anti-poverty policy solution, they observe that eliminating the tip credit is considerably less likely to deliver wage benefits to poor workers than a regular minimum wage increase that keeps the tip credit intact. They also find that in the last three decades of states’ tipped minimum wage increases, there is no evidence that poverty decreased as a result. The evidence over two decades of data suggests that raising tipped minimum wages could even increase poverty. Existing minimum wage research has found that raising the minimum wage is an ineffective method to reduce poverty. Neumark and Yen’s study builds on this knowledge: tipped minimum wages have significant disemployment effects without the ability to increase total take-home pay, and are even less effective than general minimum wage increases at bringing benefits to those in poverty. 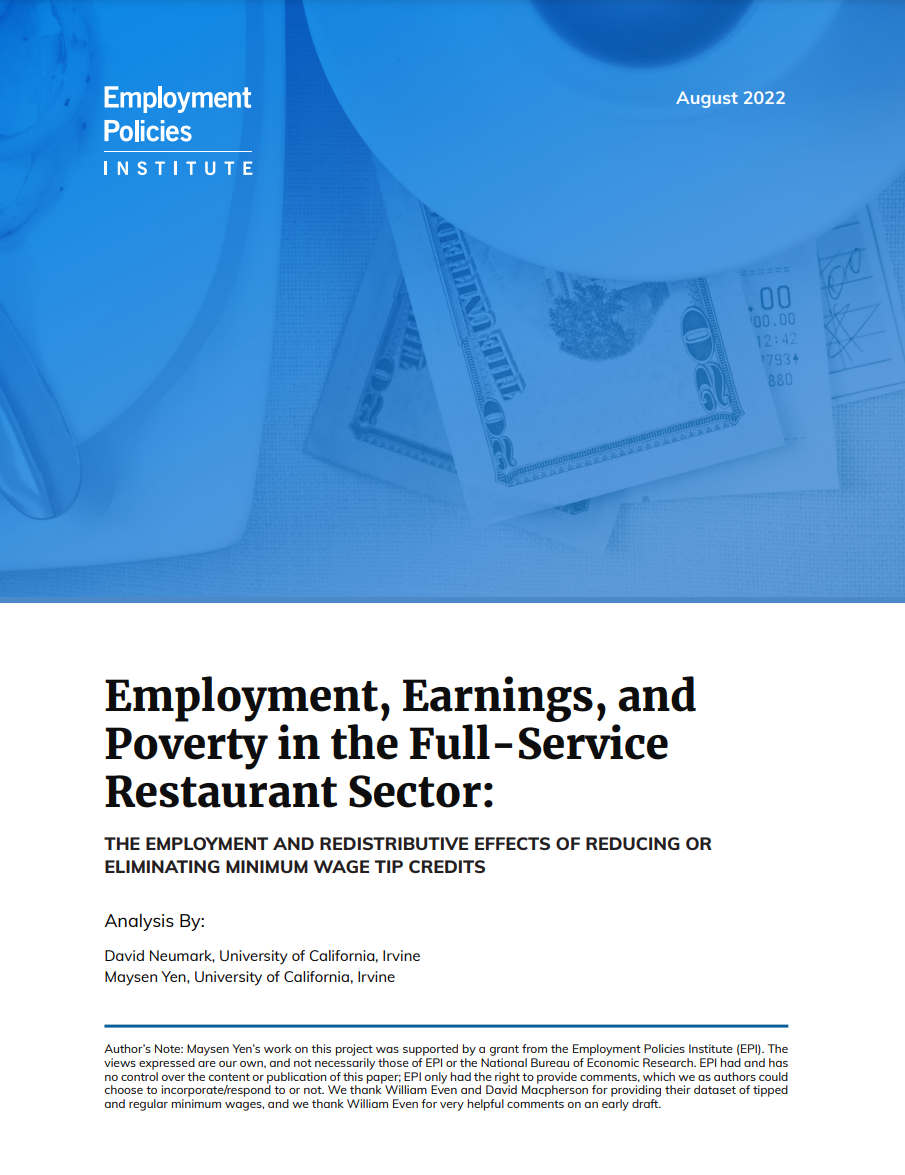