Home » Studies » Examining the Costs of the City of Oakland’s $12.25 Minimum Wage

Examining the Costs of the City of Oakland’s $12.25 Minimum Wage

In November 2014, residents of the Bay Area cities of San Francisco and Oakland voted in favor of minimum wage increases for most businesses in the city limits. The San Francisco proposal will raise the city’s minimum wage to $15 an hour by 2018; in Oakland, the minimum wage rose by 36 percent to $12.25 an hour on March 1st. (The Oakland proposal also included a paid time off provision.) San Francisco’s proposal begins phasing in on May 1st, but the Oakland proposal is already in full effect, making possible an evaluation of the short-term consequences. The labor unions supporting the Oakland proposal argued that it would reduce poverty and even stimulate the economy, as lower-paid employees had more dollars to spend. A team of researchers at the University of California-Berkeley, who have labor union connections, released a study estimating that the costs of the 36 percent hike would be negligible. Subsequent press reports, however, suggest that the costs have been anything but negligible. Articles in the San Francisco Chronicle and East Bay Express have chronicled price increases far beyond the level predicted by the Berkeley team, as well as business closures in the city’s Chinatown neighborhood. This survey, conducted by phone just under one month after Oakland’s wage increase took effect, is intended to catalog a broader range of anecdotes from affected businesses in Oakland. Over 1,300 businesses were contacted, and 223 participated in the survey. We also conducted in-depth follow-up interviews with three of these businesses, to provide more personal detail on the impact of the new law. The results, while not representative of the city as a whole, suggest that the costs of the law are more significant than proponents acknowledged. 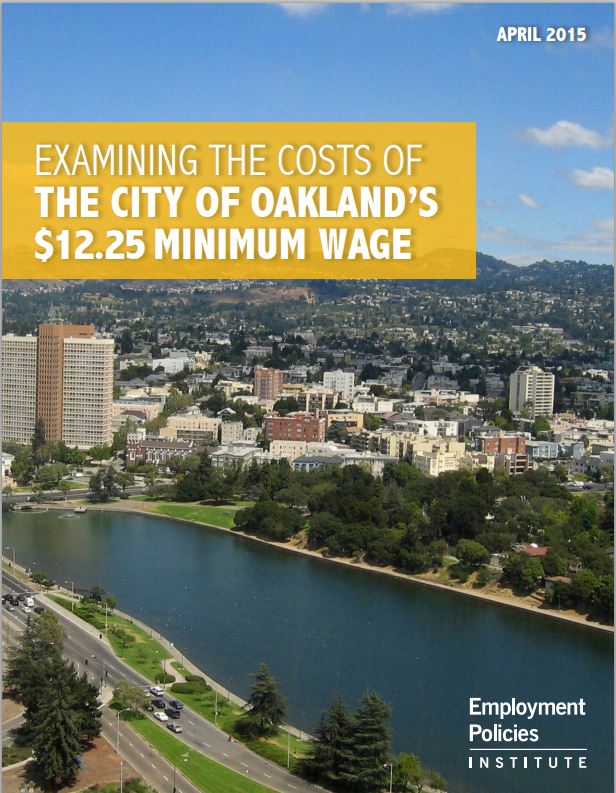