The fierce political debate over raising the minimum wage, which is repeated yearly in legislatures across the country, has at times been matched by a strong academic debate on the subject. Specifically, economists have argued over whether a higher minimum wage reduces the employment of less-skilled jobseekers. The published research on the subject points overwhelmingly in one direction: A summary of the last two decades of literature on the minimum wage, co-authored by the lead economist on this study, concluded that most of the evidence points to job loss following wage hikes. Economists have detected this job loss using state variation in minimum wages, with states that do not raise their minimum wage acting as a “control group” for states that do. But today, a small group of economists has mounted an aggressive challenge to the existing academic consensus on minimum wages. In a series of studies first published through the organized labor-aligned Institute for Research on Labor and Employment (and later in the journals Review of Economics and Statistics and Industrial Relations), they’ve argued that prior studies on the minimum wage were incorrect in blaming the policy for a drop in employment opportunities among less-skilled employees (like teens) or in service-intense industries. Rather, they claim, these employment declines are due to unrelated changes in states’ economies—in particular, unexplained downturns in employment of unskilled workers that just happen to coincide with dozens of state minimum wage increases. To get around this purported problem, they toss out most of the labor market data available to detect the effects of wage increases, and restrict their analysis to either neighboring state border counties or states in the same Census division. Using this highly-restrictive model, they claim, provides better control groups and shows that a higher minimum wage has no negative effect on employment. With the encouragement of the economists themselves, who have a history of working in support of progressive causes, these studies (henceforth IRLE papers) have gained prominence among activist groups who leverage them to claim that mandated wage hikes will have no adverse impact on employment. (One of the economists even said explicitly at a 2010 conference in Atlanta that this research should “help to pave the way” for higher mandated wages.) Or so they hope. But in this new study, University of California-Irvine labor economist David Neumark worked with UC-Irvine Ph.D. student J.M. Ian Salas to determine whether the IRLE papers have merit. Specifically, do the studies make good on the claim their authors’ have put forth, of overturning the decades of research preceding them? Neumark and Salas report that the evidence presented in the IRLE papers only runs contrary to earlier studies because the authors’ empirical models rely on inappropriate control groups, and toss out the economic data necessary to detect the impact of a minimum wage increase. They are unequivocal in their conclusion: “[N]either the conclusions of these studies nor the methods they use are supported by the data.” The authors of the IRLE papers provide no direct evidence to justify their highly-restrictive study design, instead speculating that nearby states or counties constitute ideal control groups against which to measure the effects of the minimum wage. But Neumark and Salas demonstrate that the premise of the IRLE papers is wholly incorrect: If you examine the characteristics of the control counties and states used in the IRLE papers (which the authors of those papers failed to do), you find that they’re generally very poor control groups. For instance, the authors’ preferred control for Leon County, FL—home of the Florida state capital in Tallahassee, with a population of roughly 275,000 people—is Grady County, GA, which has barely 25,000 people and no major cities. Similarly, one control state for Connecticut—a vibrant northeastern state with 3.5 million people and $237 billion in annual economic output—is Vermont, a state with roughly 1/6th of Connecticut’s population and one-tenth its economic output. Instead of speculating about which states represent ideal controls, Neumark and Salas closely examine the economic characteristics of all states in each Census Division, and find that it’s mostly states outside the Census Division that serve as better control groups. (A similar pattern holds for nearby counties, which they also examine individually.) Yet all of this identifying data is discarded by the authors of the IRLE papers. In other words, the robust set of control groups the authors use actually aren’t robust at all—indeed, they’re less suited to the task at hand than studies that have come before. And in the small number of cases where nearby states or counties are appropriate controls, the data in these cases show that employment did fall after a minimum wage increase. Given their numerous methodological problems, it’s not surprising that the evidence in favor of the empirical approach advocated in the IRLE papers is “weak or non-existent.” When the analysis is not restricted to these inappropriate control groups, the data clearly show that wage hikes do cause job loss. Indeed, in some cases Neumark and Salas find that the IRLE authors omitted evidence that exposed the weaknesses in their approach. Neumark and Salas end with a strong admonishment to the authors of the IRLE papers: “[P]rior to concluding that one has overturned a literature based on a vast number of studies, one has to make a much stronger case that the data and methods that yield this answer are more convincing than the established research literature that finds disemployment effects, and understand why the studies in that literature would have generated misleading evidence.” It’s a warning that the economists themselves should heed, as should legislators eager for studies (no matter their accuracy) that validate their ideological preferences. 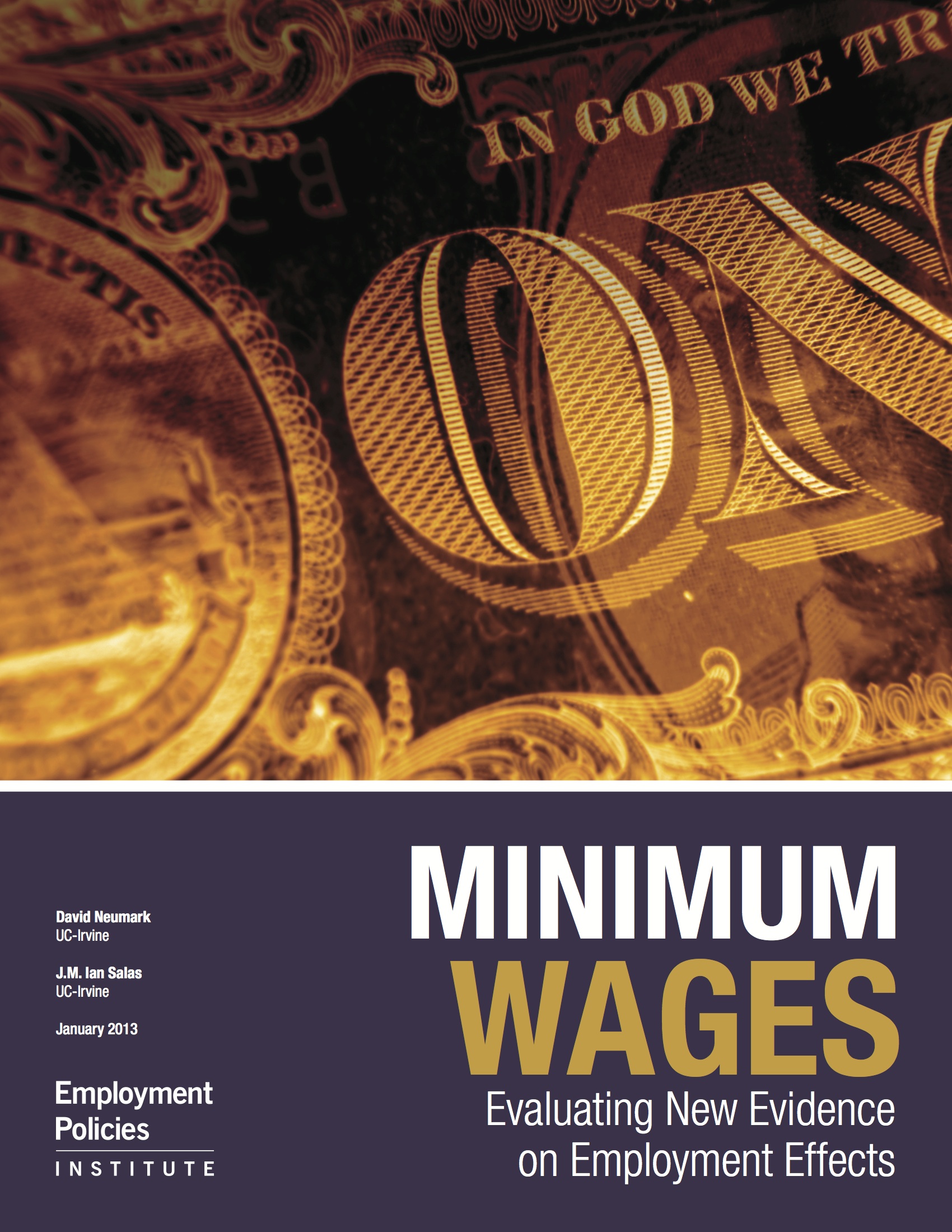