The Employment Effects of Eliminating the Tip Credit in Michigan

In 2014, legislation to raise Michigan’s minimum wage received bipartisan support in the state legislature, and the state’s wage floor rose to $9.25 at the start of 2018. The base wage paid to tipped employees such as restaurant servers was increased from $3.38 to $3.52; these employees are still legally-guaranteed the same full minimum wage as all other employees. This fall, voters may consider at the ballot box a proposal to further increase the state’s minimum wage to $12 an hour—a 30 percent increase over the current state minimum wage. However, included in this proposal is a far more radical policy change—the elimination of the tip credit, effectively raising the tipped minimum wage by 240 percent. The following analysis demonstrates that an increase of this magnitude would be devastating to the state’s service sector, and in particular its full-service restaurant industry. Economists David Macpherson of Trinity University and William Even of Miami University first analyze the impact of an increase in the state’s full minimum wage to $12 an hour by 2022. Using a methodology developed by the Congressional Budget Office, the economists estimate that the policy would cost the state approximately 17,000 jobs. This impact would be concentrated among younger employees in the hospitality and retail industries. More harmful is the estimated impact of tip credit elimination. The economists draw on their own past research on tipped wage impacts and show that eliminating the tip credit will cost full-service restaurants as many as 14,000 jobs. These estimates are consistent with past empirical research on the restaurant employment impacts from an increase in the tipped minimum wage. When restaurants’ customers recoil against paying the higher food prices necessary to offset higher labor costs, they’re forced to slash staff levels—or, even worse, to close their doors altogether. This was documented most recently in San Francisco where a Harvard study identified a 14 percent increase in restaurant closures following each $1 increase in the base wage for servers. The job-market impact doesn’t always have to manifest with closed doors. In New York, where the tipped wage has risen sharply in recent years, the full-service restaurant industry has experienced a dramatic slowdown in employment growth. One city restaurateur explained that he cut roughly 1,500 people from his staff (from 4,000 down to 2,500) not by firing them, but by opting not to replace employees who left. The net effect is a dramatic reduction in employment opportunities in the full-service industry. The proposal’s primary supporter is a controversial New York-based labor group called the Restaurant Opportunities Center, or ROC, which has raised over $1 million for its ballot committee.3 ROC has put forth a number of rationales for eliminating the tipped wage, none of which pass basic scrutiny, as is demonstrated in this report. Most importantly, there’s considerable evidence that the vast majority of restaurant servers don’t support this proposal, which would likely result in a considerable drop-off in income. The historical evidence suggests any increase in the minimum wage is at best a poorly-targeted means to reduce poverty, and at a worst, harmful to the employees it’s meant to help. In this case, the proposed tip credit elimination in this proposal turns a dangerous ballot measure into a disastrous one. 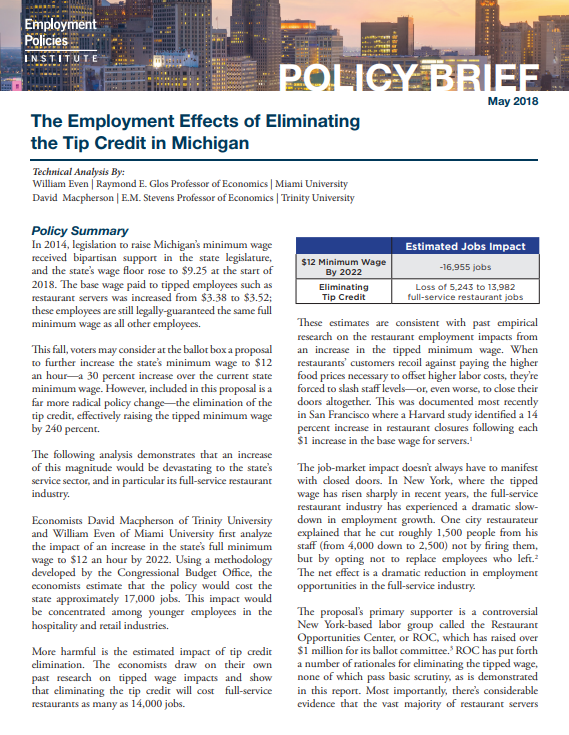