The Impact of a $15 Minimum Wage in New Jersey

Proponents of a higher wage in New Jersey argue that a $15 wage will pull families out of poverty while saving taxpayers money. For instance, Assembly Speaker Vincent Prieto argued that, “[a $15 minimum wage] will be an integral component in our efforts to stop the decline in the middle class and lift working families out of poverty.” But mounting evidence, including a new analysis specific to New Jersey, indicates that a wage increase will not deliver these results. In a 2014 study, the nonpartisan Congressional Budget Office (CBO) estimated that a half million jobs would be lost nationwide should a $10.10 minimum wage take effect. A survey of labor economists from the University of New Hampshire found that threequarters (76 percent) of respondents said that a $15 minimum wage would have a negative effect on the number of jobs available. In this analysis, Drs. David Macpherson of Trinity University and William Even of Miami University use Census Bureau data to replicate the CBO methodology to determine how many jobs would be lost should New Jersey raise its minimum wage to $15 an hour by 2024. They also examine the family composition and household income of affected employees, to determine if the wage increase would be well-targeted to families in poverty. 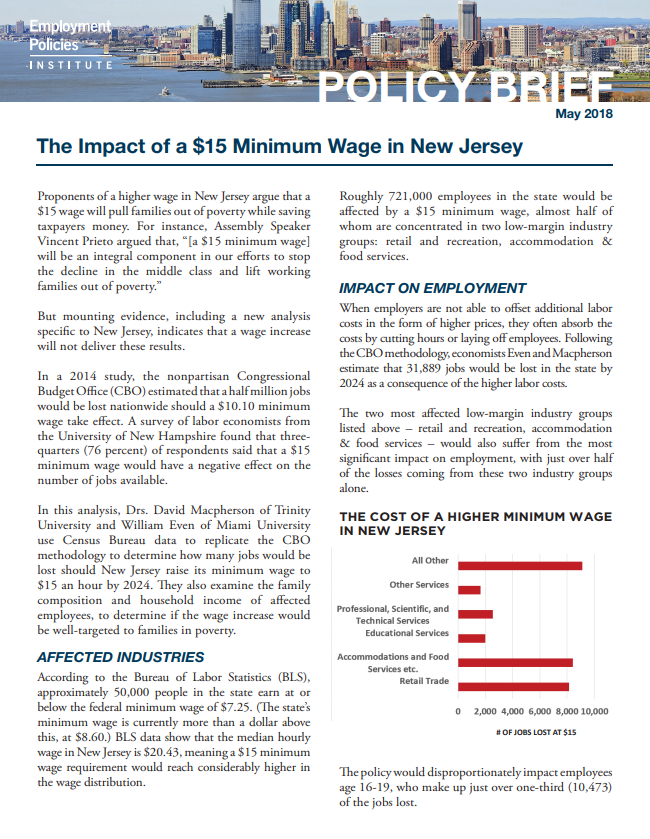