In 2012, Connecticut became the first US state to enact a law requiring private employers to provide paid sick leave. Four years later, the state remains one of the only significant sources of data on the labor market impact of such a law. (California and Oregon only recently enacted similar laws via their state legislatures, as did Massachusetts voters at the ballot box.) In a survey of Connecticut employers intended to gauge the initial impacts of the law, the Employment Policies Institute found a number of consequences during the law’s implementation: Roughly one-third of the 86 surveyed businesses had reduced other employee benefits to account for the law’s costs, one-fifth had raised prices, and a similar number had reduced hours or staffing levels. A 2015 empirical study, published in Applied Economics Letters, reviewed the immediate impact of the Connecticut law using 2012 data and found a modest but clear negative effect on the labor market, corresponding to a roughly one percentage point increase in the fraction of unemployed workers. This report, by Dr. Thomas Ahn of the University of Kentucky, is the first to examine multiple years of Census Bureau data (2012-2014) on the impact of Connecticut’s first-in-the-nation state paid sick leave law. To isolate the effects of the paid sick leave law, Dr. Ahn compares Connecticut to the five surrounding New England states, and controls for other relevant economic factors that might be responsible for changes in employment. Dr. Ahn finds that the fraction of employees working at companies with paid sick leave benefits rises from virtually zero at ages 18 to 20 to about 70 percent for workers in their mid-30s and above. He thus expects a new benefit mandate to have the greatest potential for negative impact on younger employees, who are less likely to have the benefit currently. This is exactly what the data bear out: While older employees seem largely un-impacted by the law, younger employees in Connecticut aged 20-34 saw a 24-hour reduction in annual hours worked. For a part-time employee in the service industry, that’s the equivalent of roughly one lost week of work per year. These employees lost $850 per year in annual income, the equivalent of 3.5 fewer pre-tax paychecks for someone working part-time at the state’s minimum wage. There are also other consequences to consider: In forthcoming research, Dr. Ahn and his colleague Dr. Aaron Yelowitz find that recent paid sick leave policies in the United States have increased employee absenteeism by 1.2 days per year. Notably, these absences do not tend to occur in times of the most severe influenza outbreaks—suggesting that employees may be using the benefit even when they’re not sick. Dr. Ahn is careful to stipulate that there may be benefits to paid sick leave laws that help ameliorate these costs. However, it’s clear from the Connecticut experience that the costs of paid sick leave laws are real—for younger employees in particular. 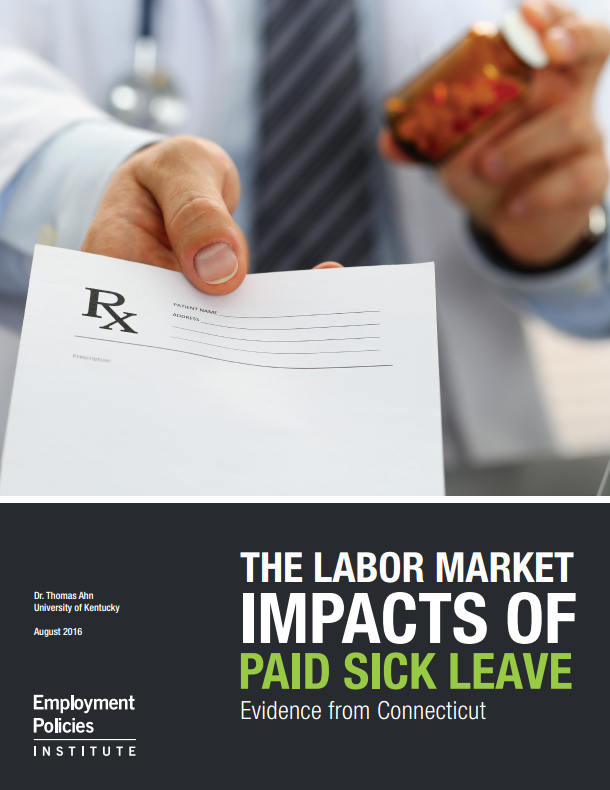