The State Employment Impact of a $15 Minimum Wage: January 2021

The crisis created by the spread of COVID-19 and subsequent shutdowns has severely affected America’s employees and businesses, and state economies still face a long road to full recovery to pre-pandemic activity levels. As part of his pandemic relief plan, President Biden has proposed raising the federal minimum wage to $15 and eliminating the tip credit—a plan that is estimated to cost over 2 million jobs nationwide. The pandemic placed severe hardships on employers, slashing revenues and cash flows that resulted in layoffs and furloughs of over 20 million employees in the first three months of the outbreak in the United States. For businesses in hospitality or restaurants where profit margins are already narrow, job losses and business closures were especially rampant, and recovery to pre-COVID levels remains slow. Additional government restrictions on business reopening have continued to negatively affect businesses and employees: for establishments struggling to remain open, oftentimes cutting jobs or workers’ hours has been one of the only solutions. In spite of mounting obstacles to staying in business, Biden’s proposal to raise the federal minimum wage to $15 and end the tip credit would create more hardship and losses for already-struggling businesses. In this study, economists William Even and David Macpherson estimate the impacts of a similar policy by using a methodology based on assumptions developed by the nonpartisan Congressional Budget Office’s assessment of the 2019 Raise the Wage Act. This methodology features updated assumptions that account for changes since 2019, including the coronavirus outbreak. The economists provide state- and demographic-level estimates of the employment impact of raising the federal minimum wage to $15, comparing employment effects by age, sex, race and ethnicity, occupation type, and industry. They estimate that if enacted, Biden’s proposal would result in 2 million jobs lost across the United States.4 This plan, which is estimated to cost employers across the country over $99 billion, will cause massive job cuts in most states, particularly those at or near the current federal wage, including Pennsylvania (143,402 jobs lost), Ohio (108,312), Wisconsin (83,683), South Carolina (55,304), Utah (35,039), New Hampshire (13,179), West Virginia (12,331), and Delaware (10,044). In this release, the economists also provide the estimated cost of a $15 minimum wage to employers by state and by industry. Nationally, states’ restaurant and bartending employees are projected to bear a large portion of the resulting job losses, and the economists estimate that Biden’s proposal will cost the nation’s restaurants and bars $27 billion alone. The impact on job losses in this study does not account for slowed employment growth, and in some cases job loss, in areas where the minimum wage has already been increased to $15. In addition, the study only analyzes impacts through 2027, a period of time put forth by the Raise the Wage Act in 2019. Depending on the timeline for implementing a $15 minimum wage and eliminating the use of the tip credit, the negative effects on businesses and their employees could be much greater. Federal and state policymakers must take into account the impact of enacting a $15 federal minimum wage: artificially raising labor costs for employers while they struggle to recover from the pandemic will cause states to lose hundreds of thousands of jobs. 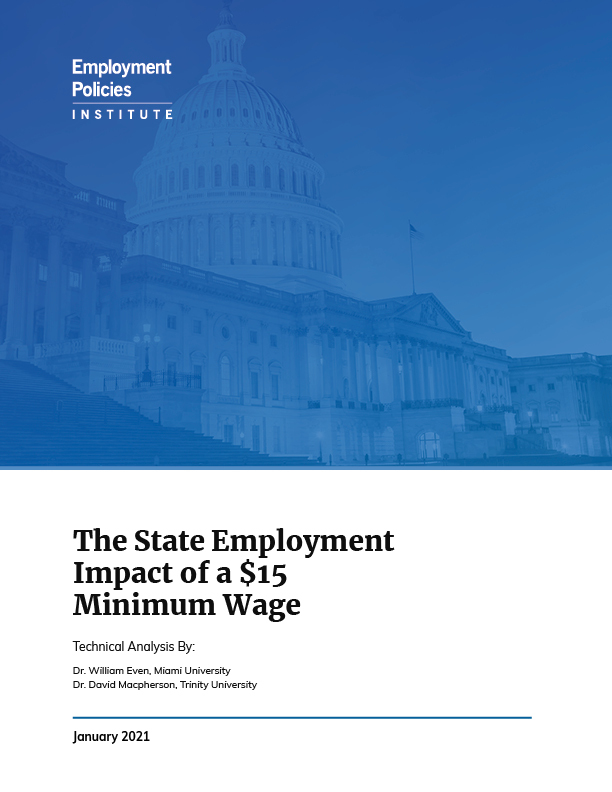