Home » Studies » The State Employment Impact of a $15 Minimum Wage

The State Employment Impact of a $15 Minimum Wage

The crisis created by the spread of COVID-19 and subsequent shutdowns has severely affected employees and businesses, regardless of industry. The U.S. faced a 14.7 percent unemployment rate at its peak in April 2020, as a direct result of the virus outbreak, and although it has declined to 8.4 percent in the month of August, the nation’s businesses and employees still face a long road to achieving pre-COVID levels of jobs and hours. As unemployment claims skyrocketed to historic highs in response, the pandemic placed severe hardships on employers, slashing revenues and cash flows that resulted in layoffs and furloughs of over 20 million employees. For certain industries, including restaurants and other hospitality enterprises where profit margins are already narrow, job losses and business closures have been rampant over the last six months. For businesses struggling to remain open, oftentimes cutting jobs or workers’ hours has been one of the only solutions. Despite these obstacles, another threat to business profitability and jobs is gaining traction on the national stage. In 2019, the U.S. House of Representatives passed the Raise the Wage Act, which would enact a schedule of annual minimum wage increases to establish a $15 federal minimum wage by 2027. The bill also provides increases to the federal tipped wage, which would reach $12.60 by 2027 and continue to increase to meet the regular minimum in later years. Joe Biden has endorsed the $15 minimum wage and the elimination of the tip credit. This study uses the framework of the Raise the Wage Act to model the effects of this platform. In this brief, economists William Even and David Macpherson analyze the impacts of this policy by using a methodology based on assumptions developed by the nonpartisan Congressional Budget Office. This methodology features updated assumptions that accounts for changes since 2019, including the COVID-19 outbreak. For the first time, the economists provide state- and demographic-level estimates of the impact of raising the federal minimum wage to $15, comparing employment effects by age, sex, race and ethnicity, occupation type, and industry. They estimate that if enacted, the Raise the Wage Act would result in 2 million jobs lost across the United States. The Arts, Entertainment, and Recreation and Accommodation and Food Services sectors will account for half of these job losses. Workers aged 16-24 will see the highest proportion of job losses, and the majority of jobs lost will be those held by women. Tipped workers will also lose a greater share of jobs affected by minimum wage than non-tipped workers—one in three tipped workers affected by this federal minimum wage increase will lose their job. The impact on job losses in this study does not account for slowed employment growth, and in some cases job loss, in areas where the minimum wage has already been increased to $15. In addition, the study only analyzes impacts through 2027, when the federal minimum will reach the $15 mark. Slowed or negative growth may continue past that time, especially for tipped employees, as the federal tipped minimum would continue to rise annually to meet the regular minimum. Federal and state policymakers must take into account the impact of enacting a $15 federal minimum wage, especially as placing the burden of steeply rising labor costs on employers on top of COVID-19 struggles will cause businesses to reduce their employment or close altogether. 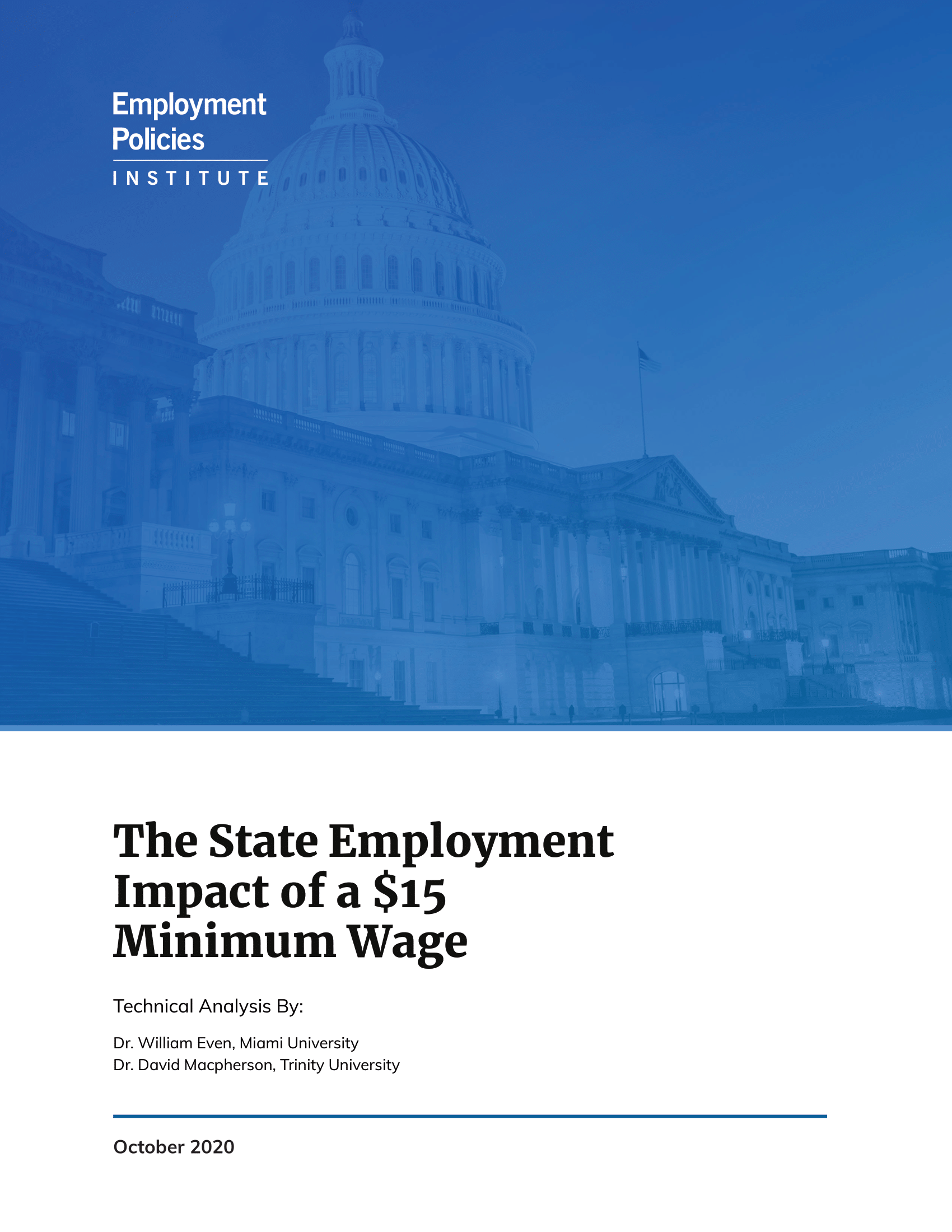