Tip Credits and Employment in the U.S. Restaurant Industry

Few parts of the Fair Labor Standards Act (FLSA) are more poorly understood than provisions relating to tipped employees. Though the federal minimum wage is set at $7.25 an hour, the FLSA permits tipped employees to be paid a cash wage of $2.13 an hour—so long as the employee earns at least the federal minimum of $7.25 when their tips are included. The difference between the cash wage and the federal minimum wage is called the tip credit. Employers are required to make up the difference if an employee’s total wages fall below $7.25 per hour. But this typically isn’t a problem; an analysis of Bureau of Labor Statistics data shows that the average hourly wage of a tipped employee, when tips are included, is close to $11 an hour. Nevertheless, union-backed advocacy groups have used the FLSA’s tip credit provisions as a rallying cry for legislative action. One report denounced the cash wage as “meager” and misleadingly lamented that an employee earning $2.13 full-time brought home less than $4,500 a year—failing to mention the combined hourly wage for tipped employees that’s well above the federal minimum. In this study, labor economists William Even at Miami University and David Macpherson at Trinity University use 20 years of evidence from two government datasets to explore the consequences of states reducing or eliminating their tip credit. They also offer projections on the consequences of recent proposed policies: the Working for Adequate Gain for Employment in Services (WAGES) Act currently before Congress, which would raise the federal cash wage to $5.00 an hour; and a series of bills and iniatives on the state level that would reduce tip credits. Professors Even and Macpherson first examine the response of overall restaurant employment to changes in the minimum wage and the cash wage. An increase in the required cash wage is expected to impact employment in the full-service sector, where more employees earn tips; changes in the minimum wage are expected to have less of an impact. The opposite holds for the limited-service (fast-food) sector. For this initial analysis, the authors use data from the Quarterly Census on Employment and Wages (QCEW). The strength of the QCEW data is its scope, as it includes 98 percent of all U.S. businesses. Its weakness is that it only provides a picture of overall employment, so it’s not possible to examine the impact on directly-affected tipped employees or employee hours. In the QCEW data, the authors find the following: Each 10 percent increase in the minimum wage reduces employment by 1.2 to 2.2 percent in the limited-service sector; each 10 percent increase in the cash wage reduces employment by 0.3 to 1.4 percent in the full-service sector. To more closely examine the impact on tipped employees, specifically in relation to the number of hours worked, the authors turn to the Current Population Survey (CPS). They focus their analysis on employees that are likely to be tipped, including servers, bartenders and server attendants. They find that a 10 percent increase in the cash wage reduces the hours worked by tipped employees by about 5 percent. The authors conclude by estimating the negative impact on hours worked that would result from passage of the WAGES Act. They find a cumulative reduction of nearly 12 million hours worked by tipped employees, which translates to a loss of 299,475 full-time-equivalent employees. The impact is greatest in states with a cash wage currently at the federal level and those that have a sizable number of residents working in tipped positions. They estimate that a series of bills and ballot initiatives on the state level would have a similar effect. The loss of hours measured in this study translates to a substantial decline in employment opportunities for tipped employees; some may remain employed while working fewer hours, while others lose their jobs entirely. Labor costs consume a disproportionate amount of revenue in the restaurant industry—about one-third of the total, according to the Restaurant Industry Operations Report. By moving towards customer self-service or automation—for example, technology that allows customers to order and pay for their meals electronically at the table—restaurants can reduce the number of servers per shift to adapt to higher labor costs. It’s a difficult but necessary course of action for restaurants faced with rising costs and customers averse to price increases. Thirty states have already taken legislative action to raise their cash wage rates above the federal level, from a few cents above the federal cash wage in some states all the way up to $9.04 an hour in Washington beginning in January 2012. (Washington is one of seven states that do not allow any credit for tips earned on the job). This research suggests that reducing or eliminating the tip credit (and mandating a higher cash wage) has already caused harm to the employment prospects of employees that policymakers (and voters) were trying to help—and that further legislative action to erode the tip credit would have the same result. 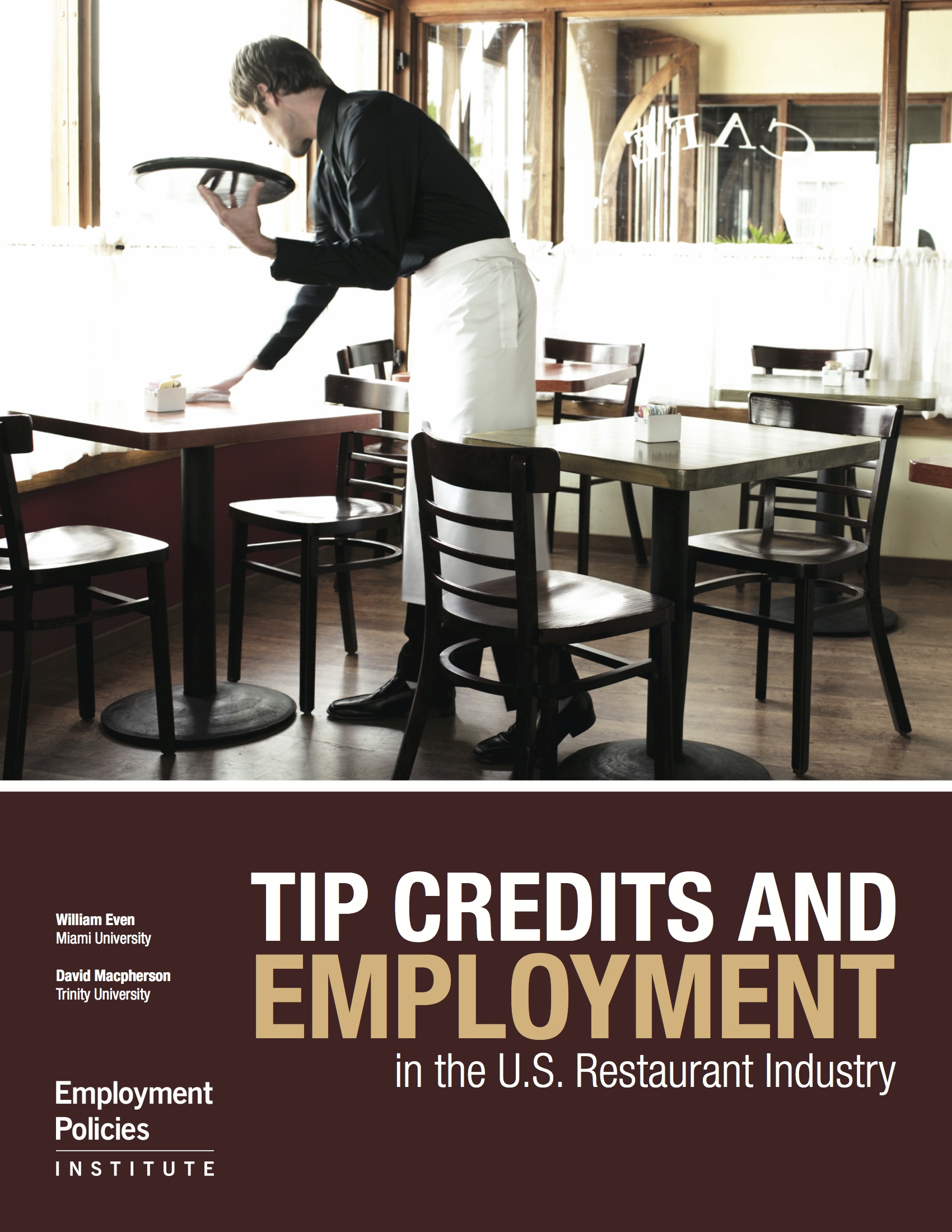