Home » Studies » By Big Labor and For Big Labor

By Big Labor and For Big Labor

Since early 2012, labor unions and the left-wing pressure groups they fund have attacked conservative policy organizations for assisting state and local legislators in developing legislation. The Service Employees International Union (SEIU) and the AFL-CIO in particular have loudly denounced “corporate interests” for funding these groups. However, many of the same unions and left-wing pressure groups employ nearly identical tactics to develop and enact liberal policies. San Francisco’s 2014 effort to establish two parallel sets of first-of-their-kind scheduling mandates on chain stores and chain restaurants—called “formula retail” in the city’s planning code—is a textbook example of this strategy. Using hundreds of pages of email records obtained under the California Public Records Act and other open-source information, we can piece together how this legislation—called the Retail Workers Bill of Rights (RWBOR)–was assembled. The email records trace the RWBOR from a meeting of  liberal and labor union groups in early February 2014 through its passage in late November—with the Service Employees International Union United Service Workers West, the AFL-CIO affiliated San Francisco Bay Area Labor Council, and front groups funded by unions colluding to develop and substantially draft mandate packages that ended up becoming city law. The following evidence shows how closely the unions and their front groups worked with legislators to draft the San Francisco bills. Hundreds of pages of e-mails between legislators, their staffs, unions, and union front organizations both in San Francisco and nationally show that union-affiliated groups drafted the basic ideas, wrote significant parts of the legislation, planned out the political strategy to gain support, and added self-interested expansions of the bills’ scope just before passage. Labor now wants to take the model that they employed in the San Francisco Board of Supervisors state- and nationwide. This San Francisco case study is a cautionary tale of how the legislative process can go awry in cities where unions have direct access to the levers of policymaking. 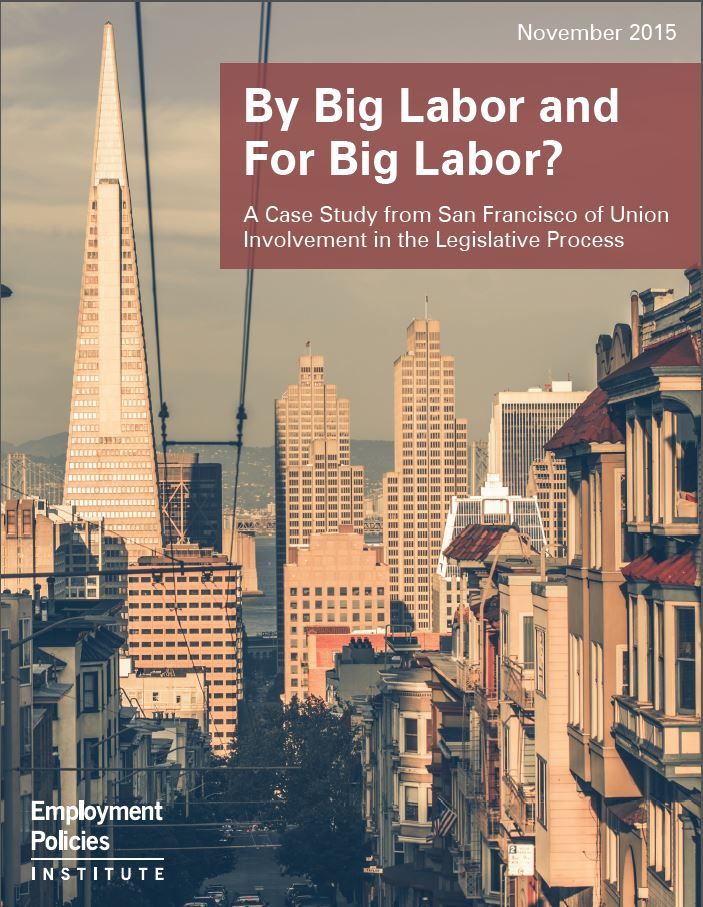