Home » Studies » Just Getting By?

Increases in the minimum wage remain popular with legislators and the public in part due to misconceptions about who earns the minimum. The most popular and seemingly persuasive argument for minimum wage hikes is that adult minimum wage workers can’t afford to maintain their families at those wage levels. Census Bureau data confirm that approximately 40 percent of the beneficiaries of the most recent federal minimum wage increase in 2009 were teens or others living with a parent or relative. This means many minimum wage earners are young adults just getting started in their career, and they’re at a time in their life when an entry wage best matches their skill set. But what about adults who earn the minimum wage; do they fit the picture of the impoverished parent that’s just scraping by? New research from Bradley R. Schiller—a professor emeritus at American University, and now a professor of economics at the University of Nevada-Reno—sheds light on this important question. Using data from the National Longitudinal Survey of Youth (NLSY), Schiller looks at the employment and family income of minimum wage workers between the ages of 33 and 50, in the years between 1998 and 2006 when the federal minimum wage was unchanged at $5.15 an hour. The evidence presented in this paper largely refutes the conventional wisdom about adult minimum wage workers: Schiller finds that in 94 percent of families with adults who work a job that pays at or below the minimum wage, the spouse works as well. In about 8 out of 10 of those families where children are present, the minimum wage job accounts for less than twenty percent of their household income. In other words, the majority of adult minimum wage earners are providing a small supplement to the income of a higher-earning spouse. Other data in this study make this point explicitly. For instance, Schiller looked at adults with children who earned less than $10,000 each year from their job. He found that: •Nearly half of these low wage, low income workers had a spouse that earned more than $40,000 a year; •Another 16 percent had spouses earning between $30,000 and $40,000 a year; •And 12 percent had spouses earning between $20,000 and $30,000 each year. Though these figures change somewhat when looking at adults that aren’t supporting children, they still depart from the conventional wisdom: Approximately 3 out of every 4 of these adults earn 30 percent or less of their total household income from a job that pays at or below the minimum wage. Schiller’s study shows that only a small minority of adults age 33 to 50 who earn at or below the minimum wage are the primary (or sole) breadwinner in their household. Previous research has shown that long-term minimum wage earners (while an enormously small portion of the population) often lack basic job skills needed to move up in the workforce. Paradoxically, raising the minimum wage in an attempt to help this small subset of minimum wage workers can actually harm them; decades of economic research show that artificially raising the cost to hire and train these employees makes it likely that management will hire a more-skilled employee to do their job (or replace that job with an automated, self-service alternative). Fortunately, there are better policy options to help this small subset. Schiller finds that very few adults are “stuck” at minimum wage jobs; while approximately a quarter of the adults in the survey at one point earned at or below the minimum wage during the eight year period, roughly 95 percent of the adults survey also earned considerably more than the minimum at some point in that same period. This is consistent with earlier research that shows that a majority of minimum wage employees earn a raise within 1 to 12 months on the job. Public policies that promote employment and increase income (like the Earned Income Tax Credit) ensure that less-skilled employees are able to get the experience needed to earn that raise. 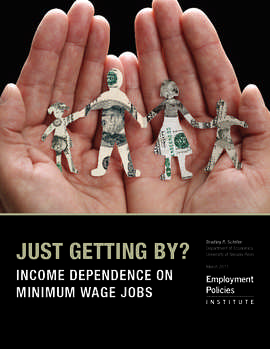